There's something that's been bugging me for a while now, and I'll put it quite bluntly: the tyrant is lame. It just isn't fun to play as, and it doesn't live up to the price you have to pay for it. Once humans hit the end-game, they get access to plasma cannons capable of blowing up nearly every alien, and giant robot suits that protect them from almost all damage. Why does the tyrant have to suck so much in comparison?

I would say that a large contributing factor to the tyrant being boring was the nerfing of trample. A while ago on GPP, the tyrant used to have a very high-damage trample that utterly creamed any humans that came between a tyrant and a wall, making it very useful in tight corridors and hallways. Now, this was hilariously imbalanced, but it made the tyrant feel like a huge beast. The changes to trample have made it turn into little more than a glorified sprint. You might as well use the advanced dragoon, because it's superior in every way. Why would anyone want to pay so many points and wait until the end of the game just to get +100 health, +20 damage, and slightly increased movement speed while turning into a gigantic, easy target?

Here, I'd like to solicit ideas on how to stop making the tyrant so lame. I'll contribute my own idea first. Why not rework the trample into something that is sort of like a horizontal pounce? You charge it up, and then you run at a high speed in that single direction without being able to turn or stop unless you collide with a human or map geometry. When you hit a human with it, you deal a single, powerful blow and cause a large amount of knock-back. This way, you can't just keep running a human into a wall, and it actually requires some skill to use because you can no longer maneuver yourself in crazy ways.

Another thing that sucks is the hit detection for the melee attack. You have this huge, hulking alien with gigantic claws, and somehow the game makes it feel like you're stabbing a tiny knife, because it's nearly impossible to hit a running human with it. A large contributor to this is the way that the view height fucks with your perspective. I definitely think that the claws need to have some wider hit detection, especially considering how slow the attacks are. Using a tyrant is extremely unforgiving because it requires you to time everything perfectly. Meanwhile, any random idiot can just join the human team and spam the lucifer cannon and get endless dretch kills with it. This just stinks, and it's a problem that has persisted since Tremulous.
Top

I agree... a great beast should feel like it. Malphas from Savage2 did it well I think: https://youtu.be/vsDt-WSc_t0

How about some sort of health regeneration that gives you a nice chunk of extra health every time you kill a human with a tyrant?
Top

The current tyrant is a joke. I agree with the proposals while thinking the tyrant should be able to be directed while trampling.

Humans must think to themselves “Oh god, no!” when they see it.

i liked the idea of trample giving tyrant an armor buff for a small duration, for example while trampling and maybe ~3-5 seconds after initial trample he takes 25%/50%/75%/anywhere in between???/ reduced damage. this would be great for initiating rushes and have the tyrant tank while the rest of the aliens got into position.

also, it would be cool if tyrants had more tools for dealing with large groups of relatively spread out humans. my ideal tyrant would be something that is geared towards initiating rushes and a big heavy nuker, perhaps balanced with long cool downs.
Top

The nerfing of the trample is probably the best thing you could have done, though the rant is still useless against bases.

The only thing it's good for is camping and stalling games, though 1 vs 1 combat in halls generally still works in its favour.

Reworking trample to become a "Horizontal pounce" would be a good idea and I think could certainly work.

As for hit detection, I can't comment as I've not used the Unv tyrant a lot yet, these suggestions are based off gameplay on New EDGE (a tremulous mod, we've nerfed the trample down by 75%), where the hit detection zone seems quite high for the claw.
Web Raccoon
Top

The Unv tyrant is very similar to the 1.1 tyrant with a slight HP nerf. The 1.1 tyrant was extremely strong and I think the Unv is very, very strong, just people don't have good enough aim to utilize it properly. I by no means have excellent aim compared to people in other games and I fear that any buffs we make to the tyrant randomly will make it completely OP once we start to attract a wider player base, especially pounce like attacks, which have been nerfed because it makes the unfun to play against. The main thing I would be interested for the tyrant would be adding back buffs for nearby teammates or adding non damage dealing debuffs that hurt humans, similar to basi gas.
Top

The tyrant would definitely be more useful if it added bonuses to nearby teammates. It would also encourage group attacks later on in the game. However, what sort of powers would it grant, and would they stack?
Top

Ishq wrote:The 1.1 tyrant was extremely strong and I think the Unv is very, very strong, just people don't have good enough aim to utilize it properly.

Well Ive played only as alien in gloom years back, same with tremulous since they released first beta, and I must say tyrant is the worst unit I've played so far and its no fun playing that giant slow attacking unit. I dont think its wrong with my aim.
Top

The 1.1 tyrant was extremely strong and I think the Unv is very, very strong, just people don't have good enough aim to utilize it properly.

That's the issue, as kharnov said:

That's how the tyrant feels (and plays): 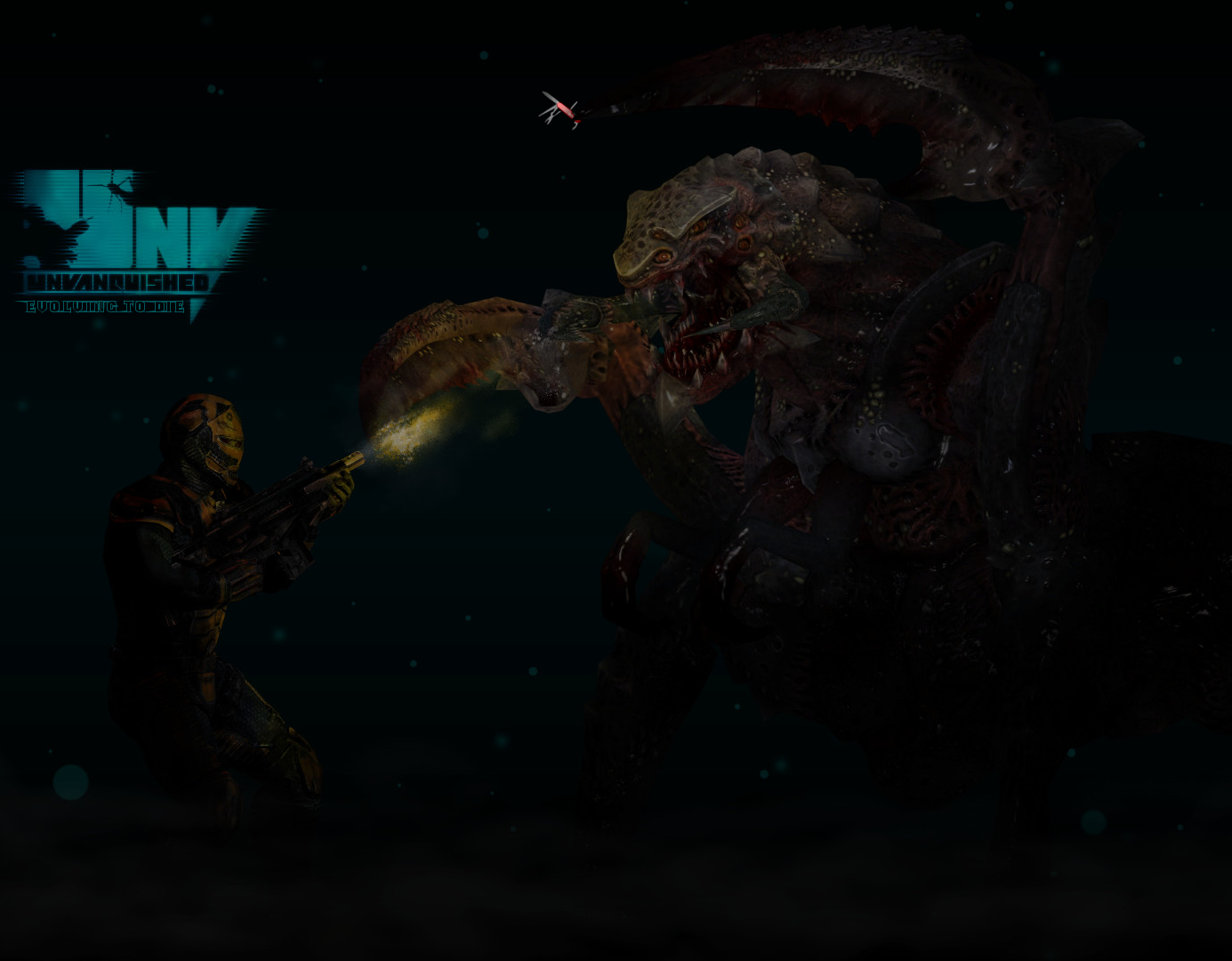 “just people don't have good enough aim” is not a good argument, the tyrant is enormous, if the tyrant was real, it must be able to crunch everyone without aiming precisely. See the picture above, whatever the movement the tyrant does with his claws, the human must be hurt.

Some quotes from IRC:

<illwieckz> The Tyrant is one of the alien class I never play. It's very strong, but I die before eating hummies. That was already true on 1.1. Buying a tyrant is just to me the easier way to lose credit, even on 1.1.

<illwieckz> Perhaps a faster tyrant can improve it, if it allows you to escape, because nobody miss a tyrant and facing rockets with a tyrant is just a joke.

<illwieckz> For a beginner point of view (yes, as tyrant I'm still a beginner), I always miss my kills. The tyrant is the bigger alien, but to kill someone you must aim a very tiny point. It's not realist at all. The tyrant claw must be able to hurt the human in front of you.

<kharnov> The attack detection needs more of a horizontal spread.
<illwieckz> This is exactly what I think about :) In fact it's exactly how I play the tyrant because it's how I would attack if I were a real tyrant with this size and these claws, but it's not how the in-game tyrant is, that's why I always miss my kills.

<illwieckz> Imagine a real tyrant with the same size facing an human in real life.
<kharnov> So what do you suggest?
<illwieckz> Every swipe would hurt the human, why not being able to hit with this horizontal zone:

<illwieckz> but make the shot less powerful to compensate and perhaps a little more close to you: I also miss humans because my brain think they are too far.

<illwieckz> The tyrant is a melee form, it must be very dangerous when very close. hummies must die just because of collateral damage, it's normal, it's enormous. Currently one of the better way to not being shot in the head by a tyrant is to be very close to him, because it's harder to aim someone very close, which is a nonsense: a creature with this size must be able to crunch whatever is close to him without aiming, otherwise it's not realist. Imagine an annoying pug that comes to bother you and is always jumping and barking between your feet, you don't have to aim to kick it with your feet. The tyrant must provides the same feeling.

I think a wider attack but closer to the tyrant and less powerful to compensate (with still ability to headshot to keep a learning curve) will fix many tyrant issues.
Last edited by illwieckz on Tue Oct 24, 2017 9:18 am UTC, edited 2 times in total.
This comment is licensed under cc ​​by 4 and antecedent.
Top

Since this is roughly the 80st thread I read in a row I will frankly admit that I barely skimmed over it. It's pretty obvious that kharnov must be writing about the fact that the Tyrant is a pretty bad investment that doesn't do much to win you the game. In particular since the introduction of rocket pods this alien form is simply underpowered given the price. It should also be clear that reducing the price and leaving it a weak alien form is no option given its appearance and size.

I read something about doing something about the trample and then there was chat about 1.1 and GPP. I don't think any small tweak applied to its current mechanics would make the Tyrant viable. It needs a redesign of its abilities (and role) from scratch. If I was to design new mechanics, this would be my main source of inspiration. To sum it up, in my opinion:

Users browsing this forum: No registered users and 9 guests