Release your maps and discuss them, from alphas to finished releases.
Post Reply
3 posts • Page 1 of 1

Hi, I wanted to toy with something different so I reopened a repository I haven't touched for the past 2 years. It's another map by newin, the guy who did the Urban Terror's contrib map named metro I already ported to Unvanquished under the Terminus name. Pronounce the map name “areacube”. 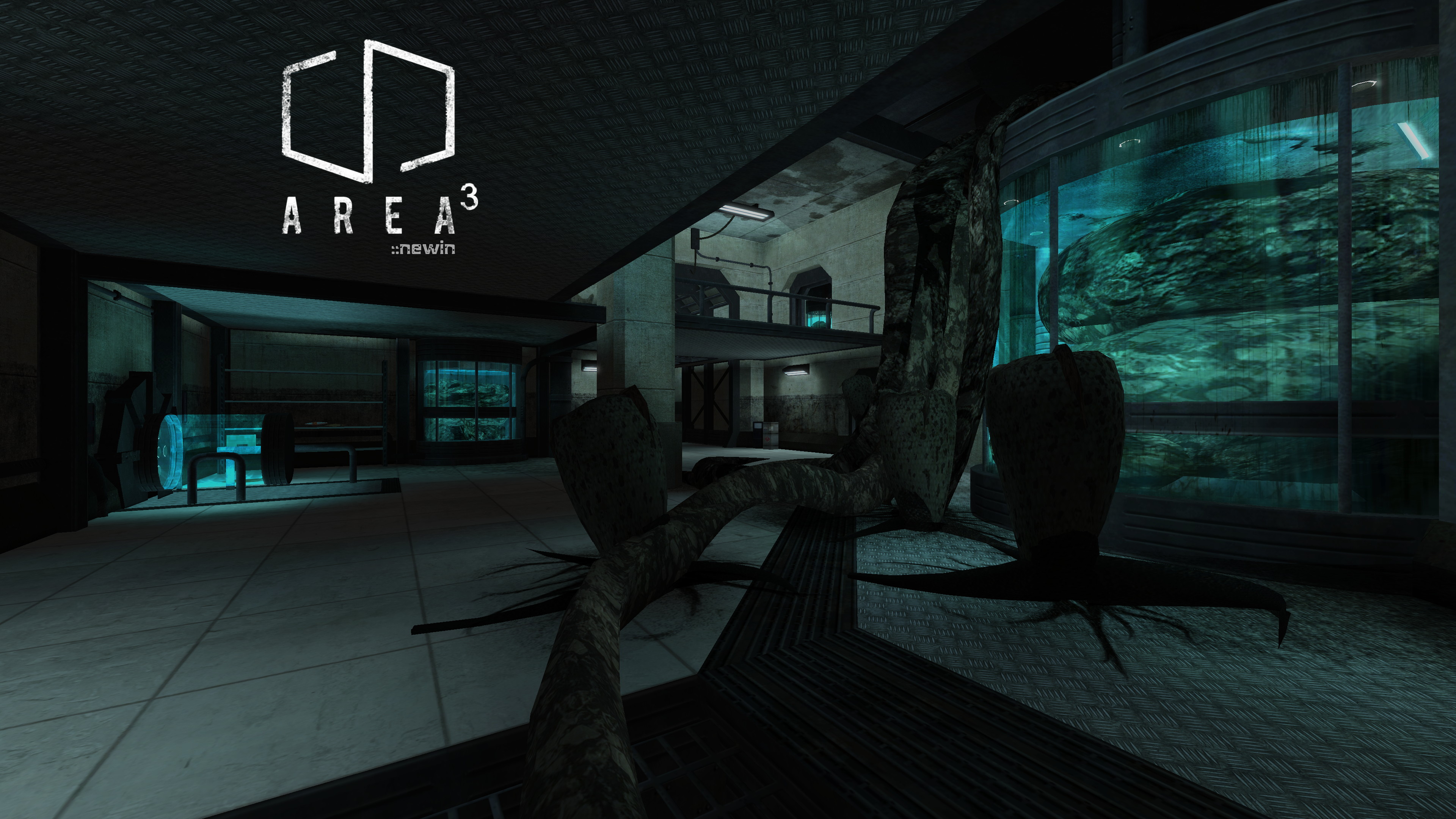 The story of this map fits well the unvanquished universe: it's an human laboratory station that got infested after some studied alien form broke its containment on zone 12.

A new life form was brought back from beyond the shoulder of Orion, it looked like an harmless rhizomatous plant at first, but workers discovered to their cost that this foreign organic form was carnivorous and walls were tragically repainted with blood and mildew.

A special force was sent on the Area³ station with a mission to clean-up everything and prevent a spread. Well, that's what was told officially. In fact the company that was operating the station wants to recover its intellectual property and soldiers are just disposable forces that will be sacrificed if there is no hope to bring back the data.

The map was ported from UrbanTerror (it was a contrib map). The map source is lost so I did the port the binary way using the Esquirel tool. Surfaces were marked as buildable, alien and human bases were added to the layout, some textures were fixed, a slight colorgrade was done to adjust the lighting etc.

There is three things I can't fix: 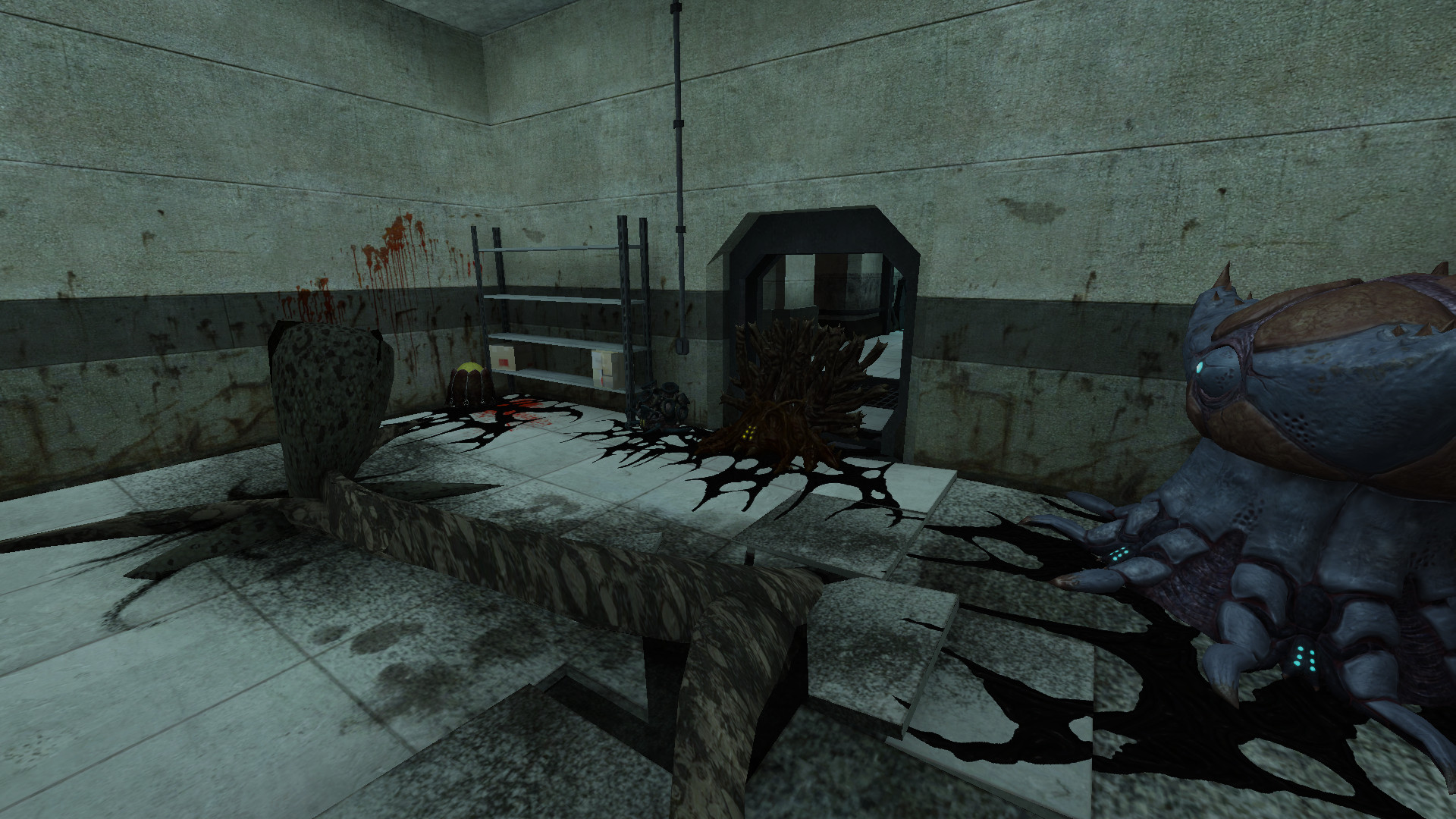 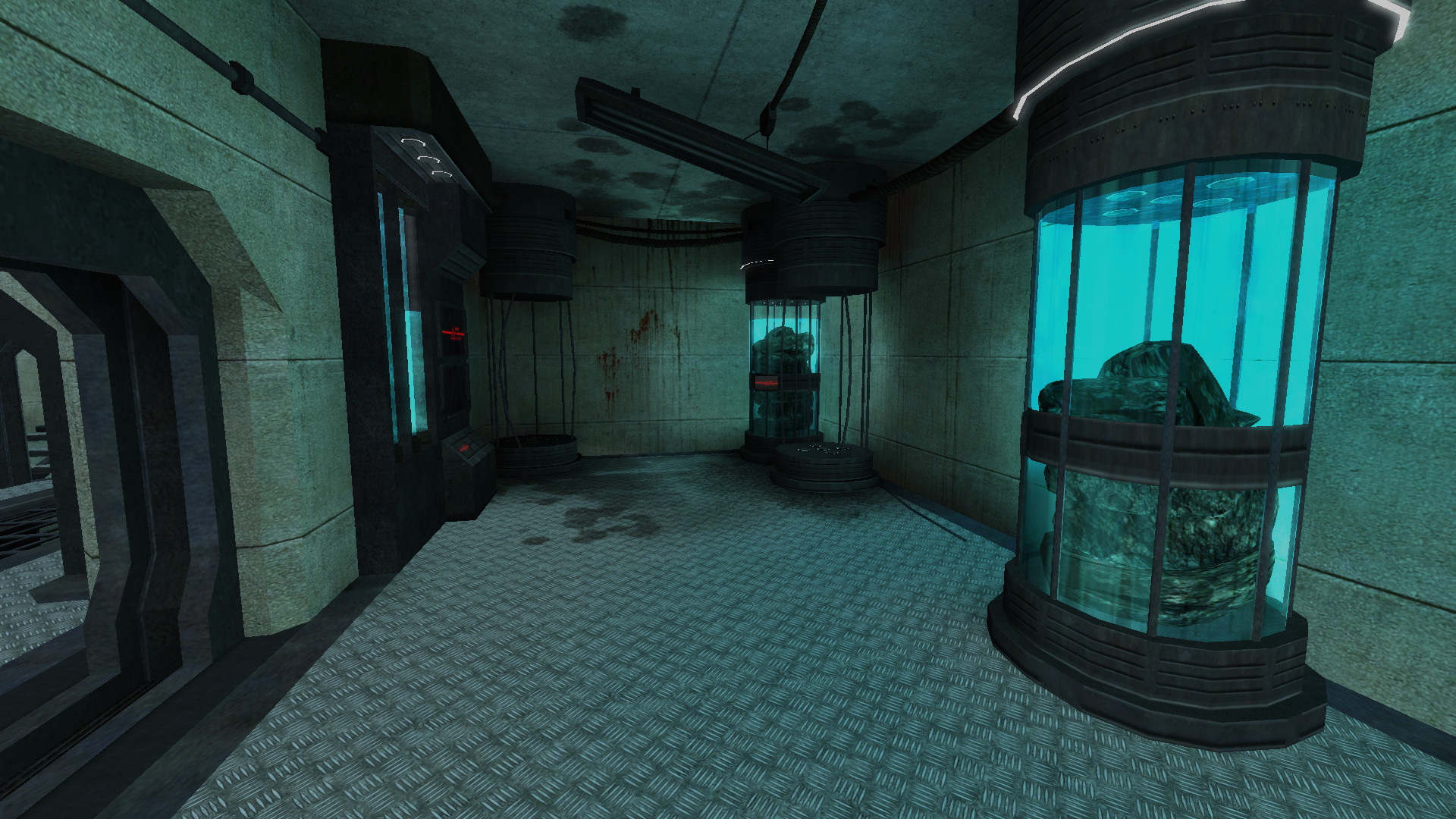 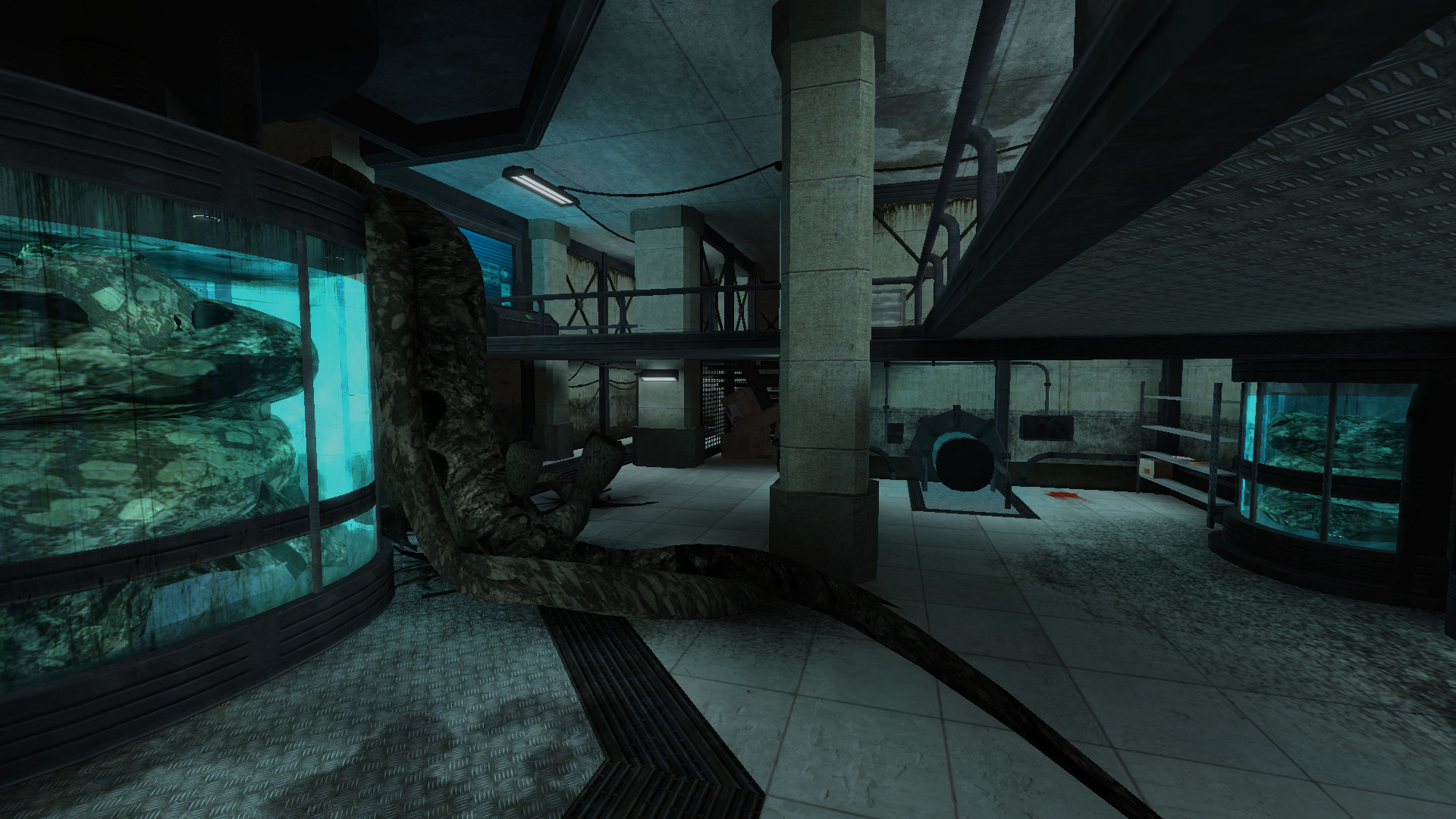 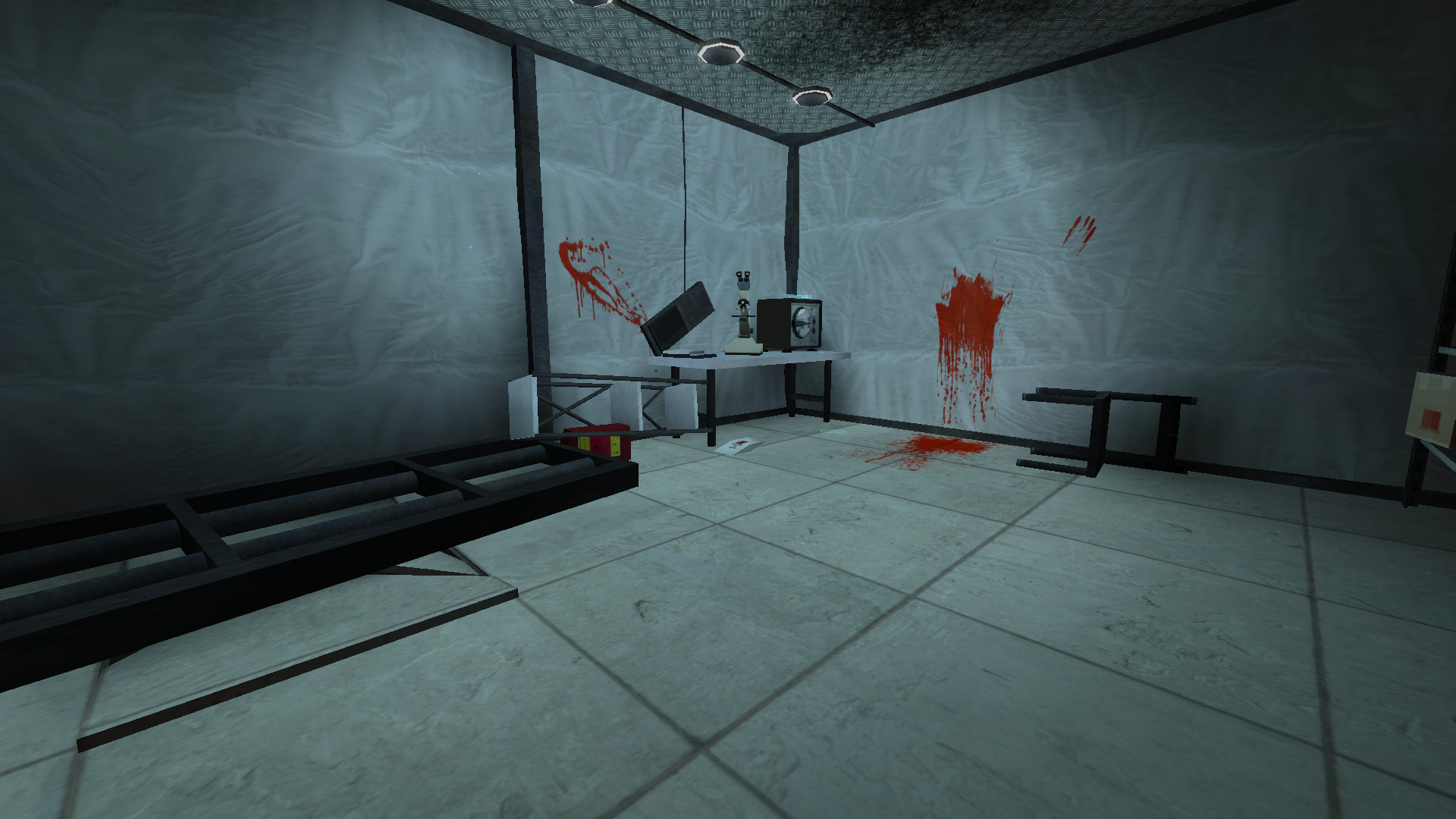 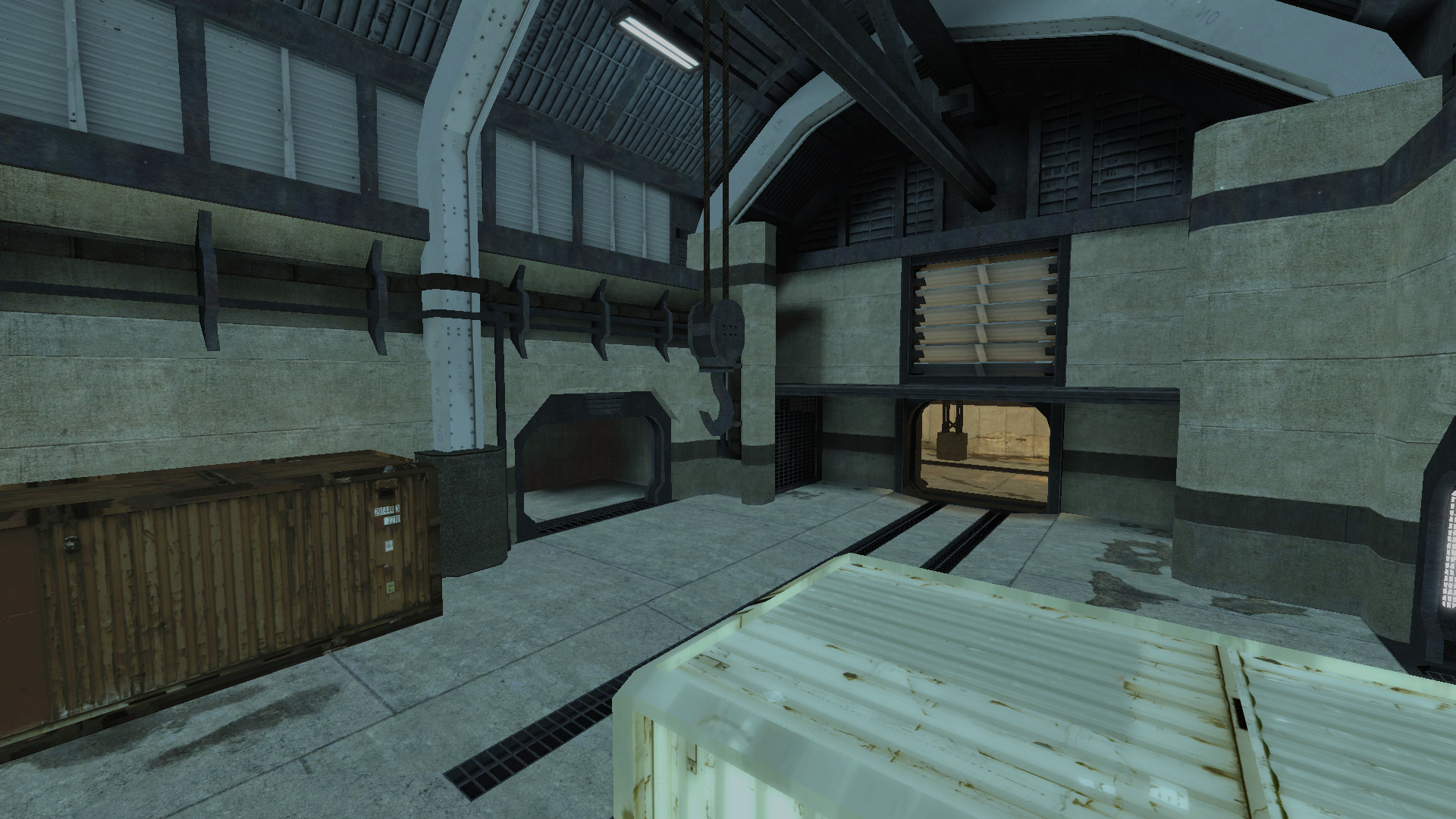 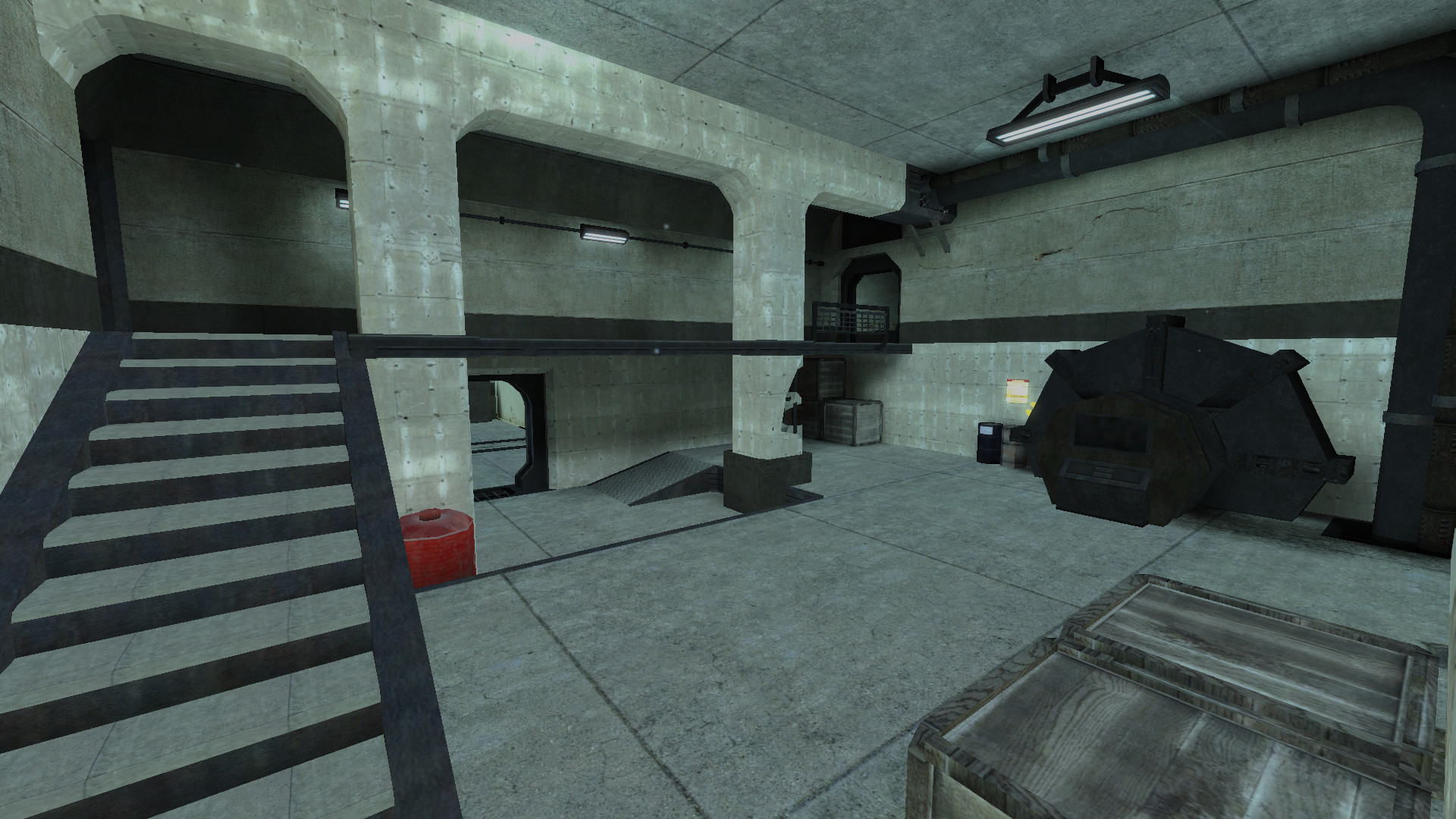 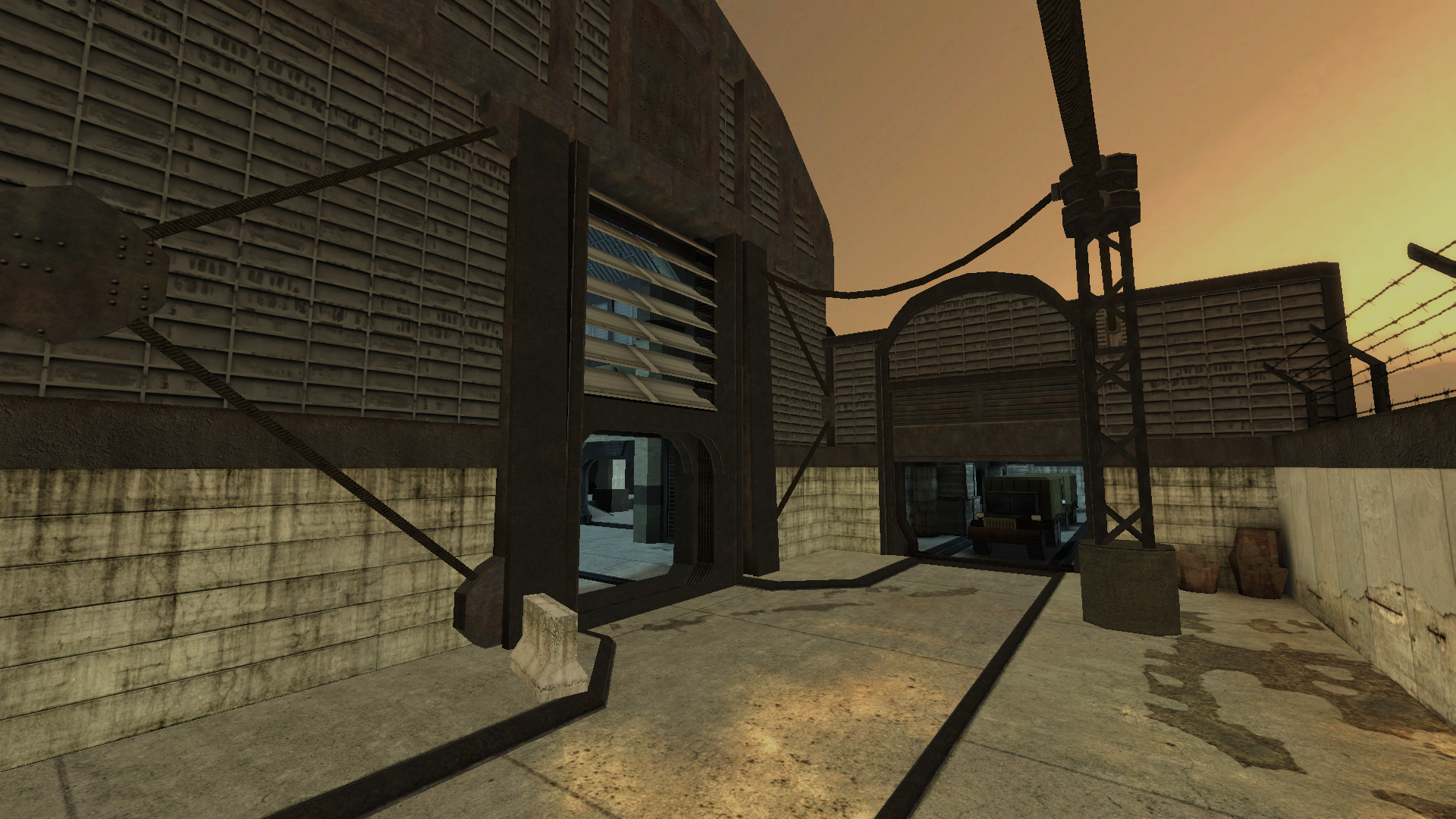 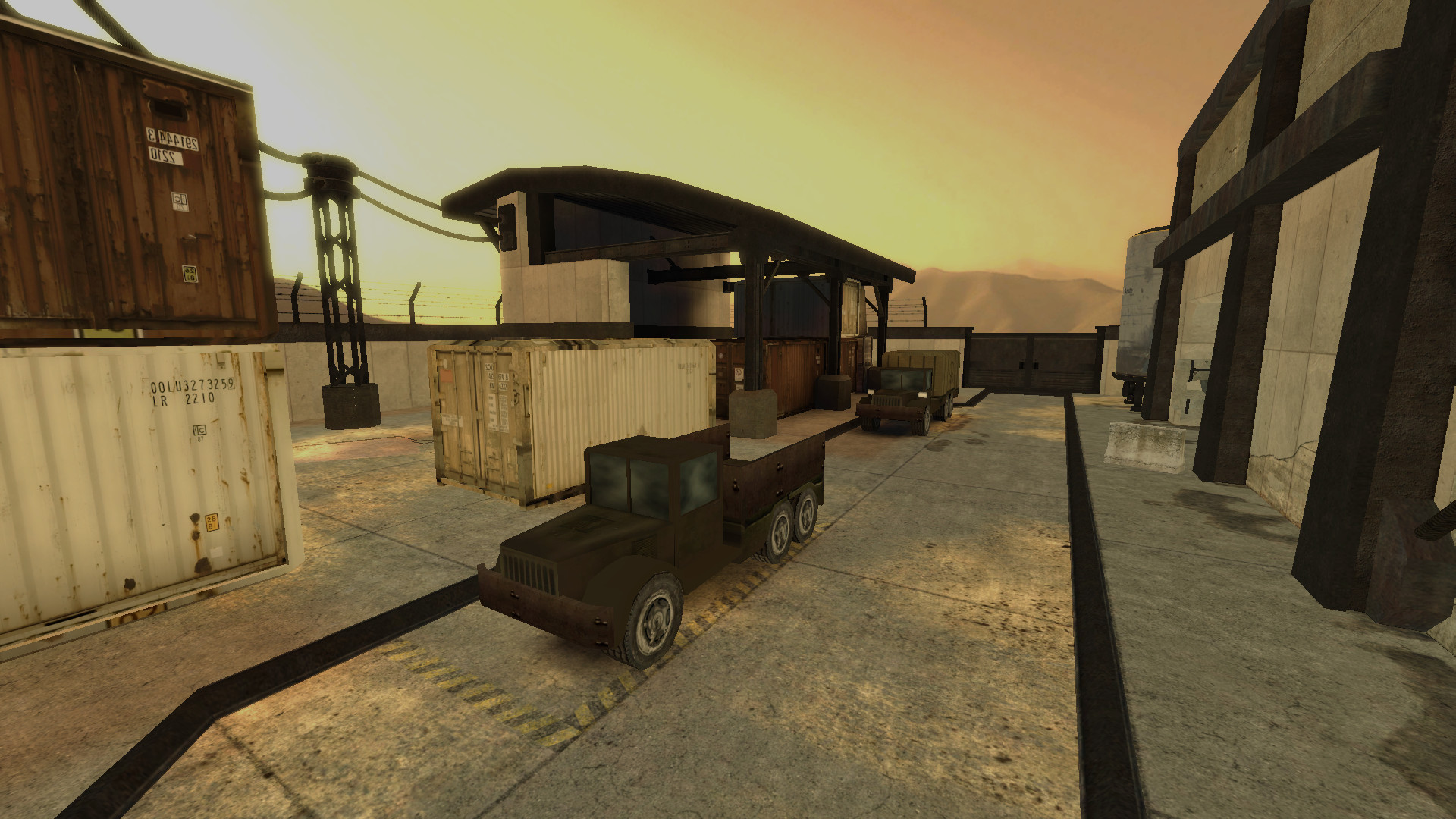 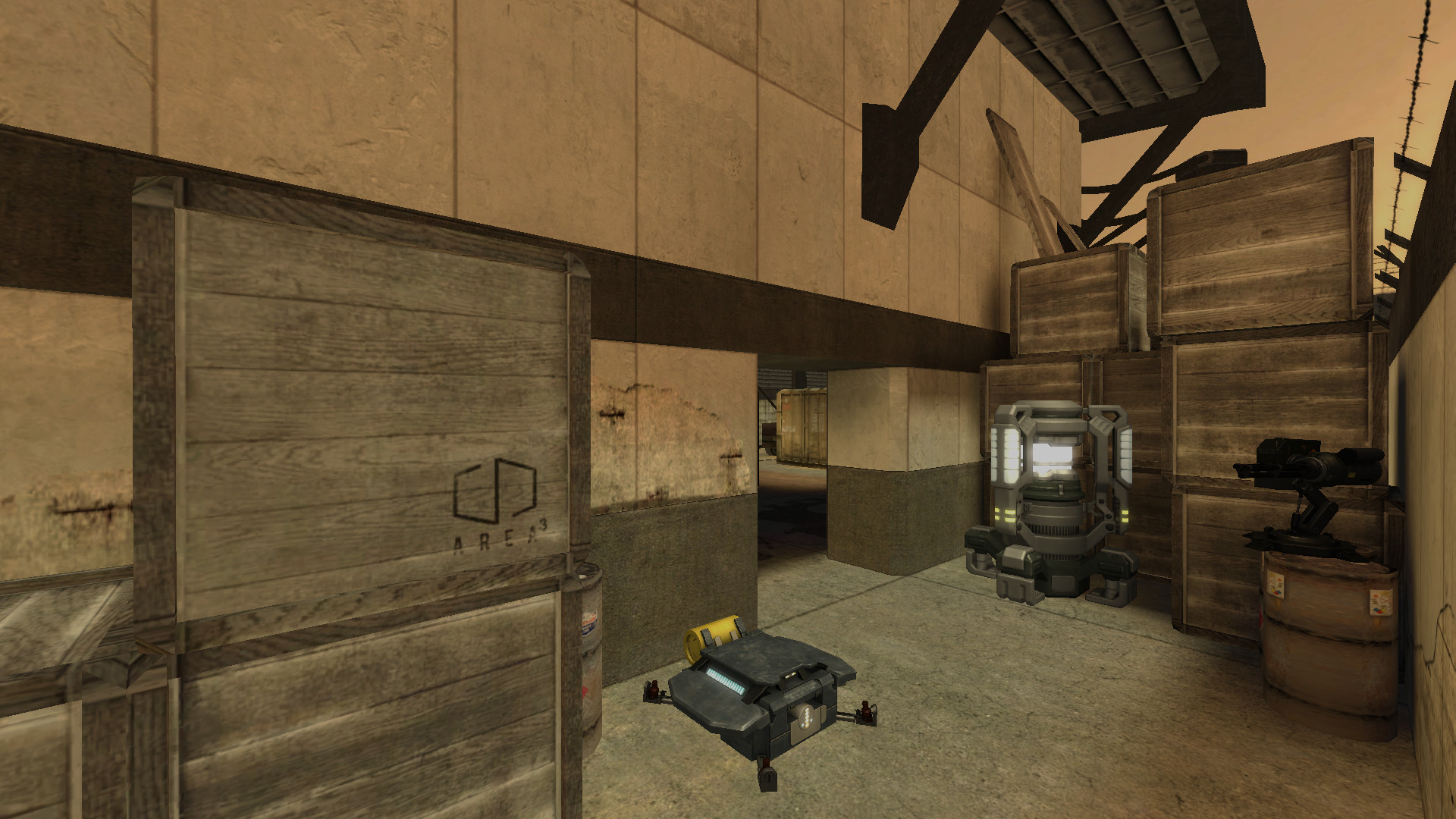 I noticed a bug newin introduced between beta3 and beta4, one shelf unit in laboratory is completely invisible, it would not be a problem if they were not visible cardboards on invisible shelves.

I'm not sure it would be possible to make the shelf unit visible again if some information was dropped at compile time. If not I can easily conceal the bug by making all the cardboards invisible but it would mean all other cardoards of the same type would disappear on the whole map which would be bad. It's technically possible to make only some of these cardboards invisible (just the ones I need to hide) but for that I have to improve my Esquirel tool first.

So, currently there is some flying cardboards in one room. This bug was in original map and was introduced by beta4. The beta3 version of the map looks the same and the bug is not present, but newin stated at this time he forgot a very important compilation option in beta3 so beta3 was having bad performances. Since sources are lost, it's better to hide the bug. ;-).

There is one improvement I would like to do, in one room there is a big machine like a generator or I don't know what, with some radioactive symbols. I would like to add a machinery ambient sound near that machine, like an humming sound or something like that. It would be very easy since that kind of job is done in the textual part of the bsp.

The outdoor roof is currently buildable, I can probably mark it as unbuildable but I don't know if it's a good idea or not, gameplay will tell.

I got a nice game on this map last sunday against someone (1+2 bots against 1+2 bots). I played the alien team and a good alien strategy seems to span the base across two places: the former alien base and the laboratory room where there is invisible shelf bug. :-) The human player had some good idea to build forward bases above some indoor container, it's not good for human bots but with real players the strategy can be a good one.
This comment is licensed under cc ​​by 4 and antecedent.
Top
Post Reply
3 posts • Page 1 of 1